First to France – as usual
Since getting back from Spain/France in mid-March we had worked out a plan of sorts.  I am not so fond of hot sunny weather – once the mercury gets close to 30 I start to get scarily hot and prickly and red-faced.  Neil loves it even though he too heads for the shade whenever possible.  The other factor is the desire to go back to Greece – pre-van Crete used to be our destination in early June.  It will have to be the mainland this year as taking the van to Crete may be a step too far!  Even getting to the mainland will be costly because it requires a ferry crossing from Italy.  True, there is a route driving south through the Balkans (also on our agenda for another trip) but there is an Albania-shaped obstacle just before you get there. A few commited motorhomers have tackled that route but it is still a bit of an unknown and insurance can be problematic.

I had vetoed Greece any later than mid-June due to likely heat but we needed a reasonable spell of time there to make the expensive ferry crossing worthwhile.   Working back from that we needed to be in Ancona for the ferry towards the end of May, leaving France about ten days before that and having at least two weeks to straighten out the fermette on the way.  That meant we should have left towards the end of April.  Which we didn’t for one reason and another. But at least an early spring meant I saw my lovely miniature acers come into full leaf.

Yet again the economical option of driving to Folkestone to get the ferry was abandoned and the Hull-Zeebrugge crossing was booked for 6 May.  It is not actually as profligate as it seems if you count the fuel cost, overnight camping and meals on the road to go the other way – and, most importantly,  it removes the unpredictability and anxiety of a 270 mile drive to make a deadline. And we prefer it!

After an otherwise healthy winter Neil came down with shingles (no picture) as soon as we got back to York – a really vicious, painful episode of the virus that lasted a full six weeks – and has not fully gone yet nearly three months later!  So we kept dithering about picking a date to leave. Then, just after booking the ferry, we both came down with fearsome colds:-(  With Neil still full of it and me starting it with a complete loss of my voice we packed up and set off.

Esternay.  It was a wet, grey day and I was so full of cold I am not sure I ventured outside the van and have only the slightest memory of what the place looked like. Fortunately Neil did venture out and took a picture – a nice town square with a boulanger opposite.  At least we would be handy for fresh bread in the morning.  Wrong – it was a bank holiday in France so it did not open:-(  Victory in Europe day apparently. How do we always manage to get caught out like this?  Thank you Esternay nonetheless.

Neil was a few days ahead of me with his cold (but I do not blame him!) and I got it badly.  So my two weeks at the fermette was spent in a haze of aching sinuses, unending mucous and soggy tissues.  Lovely! Because of this we had not been round to greet the neighbours – ninety-year olds and colds are not a good mix.  They must have heard all the snorting and honking though because when I phoned to say goodbye and apologise for not popping in there was some alarm – my broken french (and the appalling telephone line) had not accurately conveyed that the phone call itself was the goodbye – they thought I was inviting us round to see them! Never has a farewell been so warm and sincere once we got it straight.

Neil prised the barn doors open, got the car started, mowed the lawn and kept the fire going for the first few days while I lay around and slept mostly.

Then the weather picked up and I managed to get a few tomatoes and basil plants in. We will be away at least six weeks and tomatoes need support – I created a network of sticks and string in the hopes they will grow through them and stay upright. 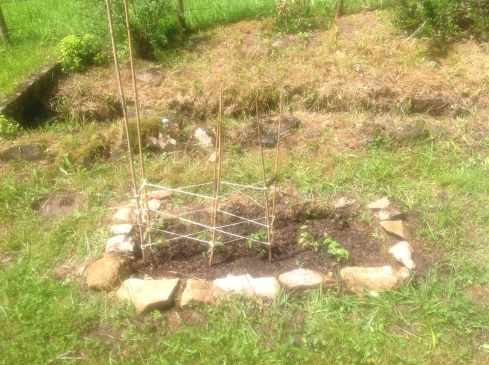 Or the other neighbour might take pity and tie them up.  He started to grow veg in the plot immediately behind ours when he retired a few years ago but gave it up as bad job. A townie all his life I think he thought it was a sort of magic that worked come rain come shine without too much hassle and was unprepared for poor crops.  The underground spring should keep the toms watered as it did last year – although we only went for up to ten days at any one time then.  I also got to see the irises flowering for the first time since planting them four years ago.

We ventured as far as our local village for the festival of the Raising of the Cow – whom we found posing for photgraphs before the hoisting.

Called Blanchette, she graces the church roof during the summer months and another festival, the Festival of the Chestnut, sees her descent in October. Legend has it that a real cow was put up there in a time of drought to graze on the grass on the roof and the story  is still  honoured.  The memory of Blanchette herself is honoured in a chunky plaster model as the church roof no longer offers good grazing. The festival has an accompanying brocante,  stalls of regional produce and a chipolata and chips opportunity at the food tent.  Feeling poorly we managed to force down a couple of helpings of  chipos and chips before retiring to the cool of the fermette.

It was now past mid-May and time was getting short.  Obtaining several boxes of tissues we consulted books, maps, on line apps and picked a route for crossing the Alps to Italy.  We felt nervous but fixed a date for moving on Friday 19 May.