Still in history-viewing mode we left our lovely parking spot in Seville and headed south-east towards the mountains and the ancient town of Antequera. It has been occupied by Romans, Vandals, Visigoths and and Moors in its time but it is the remains of the even older, third millenium BCE, population that I wanted to see.  I had found a reference to dolmens on a search – which to me means standing stones.  Those in Antequera are apparently also burial barrows which I would expect to be mounds of earth.   So – it would be interesting to see these hybrid monuments.

Again we just followed the main road but this time the passing scenery got more interesting as we approached more mountainous territory. Once we reached Antequera some really high sierras could be seen in the distance. The aire is free and nicely placed in the lee of the wall of the football stadium a short walk from the centre of town.  I knew the dolmens were at the other end of town, but I had not realised quite how hilly it was.

Why did we not get our e-bikes out for that distance in this heat? Not sure – we certainly should have – but, joy of small joys, there was a little tourist tuftuf that did a circuit of the town and you could jump off at the far end to look at the dolmens.

Disappointment followed joy as the tuftuf driver explained the dolmens were shut on Sunday afternoons:-( Not to worry I said, what time do you start in the morning? They are shut on Mondays as well it seems:-(((  How do you shut a bronze age burial barrow-cum-dolmen in a field?  We decided to walk over anyway to see what we could see.

The streets wound up and down 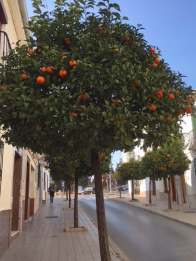 , many lined with satsuma trees covered in bright ripe fruit. Many were lying on the ground – why did no-one harvest them we wondered? When no-one was looking I picked a low hanging fruit and shuffled around a corner to taste it. Wow – what a mistake! So sour and sharp it was like an electric shock. Spitting in the street is so inelegant:-(  So now we know why the enticing fruit just hang there and fall unwanted to the ground. A pity they did not plant edible varieties. This is the tree that nearly killed my taste buds.

It was hot by now and there was a long downhill drag to the dolmens. We plodded optimistically on and reached the seriously unfriendly fence surrounding this UNESCO Heritage site of mounds and stones. The panels were so arranged that you could not get a good look at the monuments until you were quite far away. My photo shows this. The photos below show what we could have seen thanks to an anonymous camera person who was lucky enough to be there on an open day and kind enough to post them on the internet.  Definitely not what I had expected and definitely one to go back to. Mid-week to be on the safe side!

Monday morning and on again down the motorway heading for the town of Velez-Rubio – for no particular reason than it was on our route and had a free aire. Now we were passing over and around some big mountains – the (original) snowy Sierra Nevada loomed in the distance. Lovely scenery with acres of almond blossom just coming into bloom and intriguing dwellings cut into the cliff faces.  Many houses were just a normal looking house front built up against the rock – presumably with caves hollowed out behind for rooms. The photos snatched from a speeding van do not do justice to the place. Another area to come back and explore rather than just pass through. 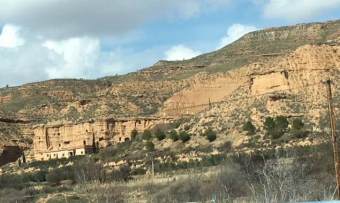 Velez-Rubio was a pleasant, well looked-after town with a historic centre where we had a quick walk around, ate, slept and left the next day. Good aire though – positioned on the outskirts of town with a nice countryside view. Several other vans joined us for a chat later on – thanks citizens of Velez-Rubio!

It’s now 20th February and we were pretty much just focussed on getting to the Med. We could have done it from Velez-Rubio but the campsite near Denia was booked for 21st so another night in a free aire was called for. There is one in Castalla that, like many others, is sited next to the town sports complex. This one was great as it had a few electric sockets in the periphery wall – free if you were sneaky because there was no-one around – or €3 if you waited until the gym and pool opened later on.  Being good little motorhomers we went and paid. Our reward was to be offered free showers in the changing rooms if we wanted! With all this sun the solar panels keep us all charged up but having the electricity saves gas on water heating and lets us use the microwave to easily heat up lasagne, for example. It can be a slow and messy job in a pan! We gave up using the oven some time ago considering it a bit wasteful, but it makes a handy extra cupboard.

Castalla is aptly named for its castle. This towers above the town on a rugged pimple which pretty much demands to be climbed.

It was hot. We would make a start and allow ourselves to give up if necessary. As it happens we kept going right to the top!

On one pinnacle was a burnt cross with a view.

There were water tanks cunningly cut into the rockface fed by other channels cut into the rock to gather rainwater in time of seige. Or maybe just to save trekking up and down to town every day for a wash. 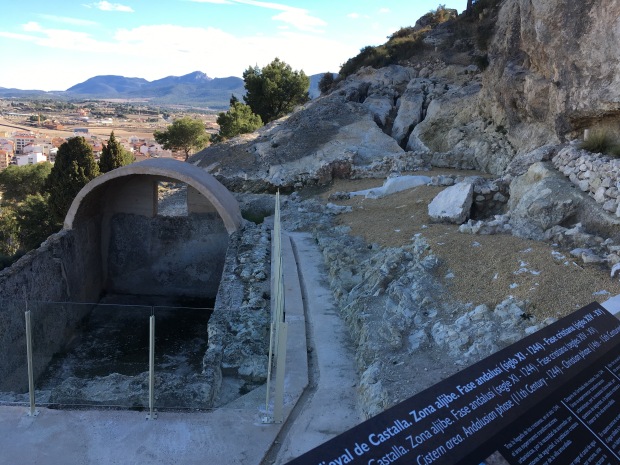 Information panels related the now-familiar story of successive waves of occupants in the town. Culminating in a line of diverse motorhomers quietly spending  the night and enjoying the sights. A nice visit – thank you Castalla.

Tomorrow – one of our favourite campsites on the Med. Fingers crossed for a sunny spot!