Pausing only to take advantage of the summer heat in France to give a couple of critters a good scrubbing we planned the route home.

Because my mother had moved down to Bristol we could easily incorporate a visit by taking the ferry from Cherbourg to Poole. This had the added advantage of passing close to friends from university days living in Dorset, whom we had not seen for a decade or more.

Heading northish/westish we aimed for the Loire valley and found a green and lovely spot beside the river Cher, a tributary, in the old town of St Aignan. Lovely, but awkward due to being on an uneven road edge with van-penetrating short bollards marking the limit of the parking. Neil navigated into the spot with precision and the panels remained unscathed – even when unparking the next day with other vans having closed the gap:-(

The geraniums came with us as I could not bear to think of them sitting on the steps of the fermette freezing in the frosty Burgundian winter. (They made it home to York   unmarmalised and, by the good graces of our house sitters, should be coming back to France in July 2018.)

Racing northwards we spent the next night in one of the generous Aires in Fougères –  a remarkable fortified town just on the edge of Brittany. This steeply hilly old town afforded us some exercise but we did not dally as our sailing was a mere day away.

We spent our last night in a paid aire in a small fishing town a few miles from Cherbourg called St Vaast la Hougue. A charming spot with a chapel to seafarers and a café on the front that will sting unwary visitors hard for a mere cup of tea:-(  Lesson –  check the menu before sitting down even if it does make you feel miserly. Rain showers patrolled menacingly across the horizon but failed to make landfall. 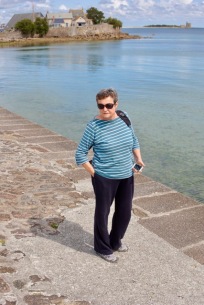 Last day in la belle France and we parked up early in Cherbourg for a late afternoon sailing to Poole – not ideal but that is what happens with late bookings. Roaming the town in search of some mimolette cheese for Lorna and John, Neil found just the person to ask. 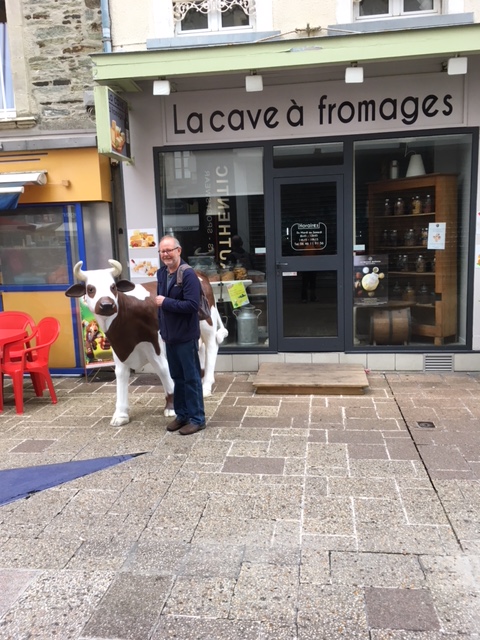 Sun set as we crossed the Channel.

Darkness fell before we arrived in the undulating field that passes for a campsite near their house. We parked on a bit that looked flattish in the dark taking pains to avoid guy ropes and feeling guilty at weaving between tents after ten thirty:-( Next morning we found a bit that was actually flat!  It was a holiday weekend and the site was filling up – we had to ask the next van that arrived not to park with their awning practically extending across our door. Campsite fire safety rules say you should be at least six metres from the next person so it was an easy ask.

We spent the weekend walking and talking with Lorna and John and their two sons (whom we had last seen as babies!) and eating in their amazing, quirky, stone cottage. Then on to try and park near enough to my mother’s home in Bristol for her to manage to walk out to see the van. The tall stone entrance gate to the car park is very narrow and the road outside busy so we did not fancy tackling the manoeuvering that would be required to get a straight run at it – with no guarantee of success! By some miracle the minor road beside the park opposite her home is marked on park4night as spot where you can overnight! We did! Mummy managed the two hundred yards including a dash across the road, with our support and our urgent advice not to stop for a breather on the white line! She was amazed at the van and how it managed to contain a whole house in such a compact space. I am very pleased that she got to see it. Onto a CL a couple of miles away near Helen’s house (another lovely old stone cottage!) and another day or so with family.

We could not make York from Bristol before closing time at our storage so we spent a final night at a rural CL in Alne where the chickens welcomed us back to Yorkshire.

And that is it for summer 2017. The garden at home had suffered slightly more than the one in France as it had been untended, except for some pot watering, for over three months. It was a tad overgrown:-( There’s a large shed somewhere back there! 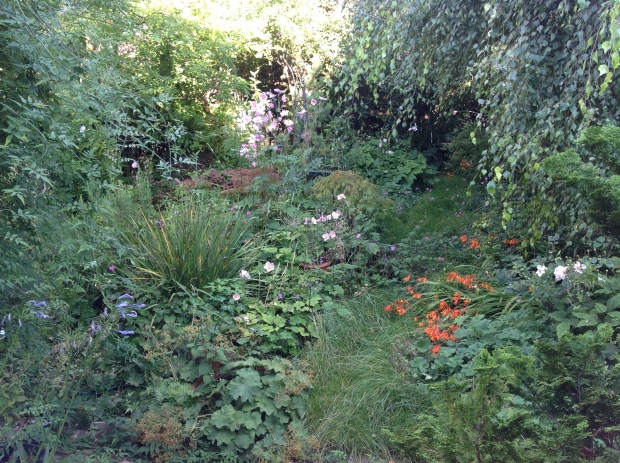