via Sparta to the Argolid
By now we had realised we could spend endless weeks footling around the ruins, villages and beaches of the Peloponnese. Names from antiquity tumbled from the pages of the maps, 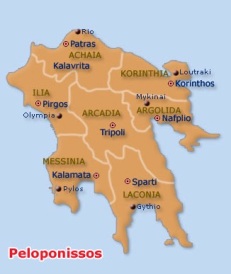 guide-book and road signs; Sparta, Arcadia, Thermopylae, Mycenae, each calling us to loiter with the mythical shades amongst the fallen pillars and tumbled stones.  But…. we had a rough plan and it is difficult to abandon a plan, however sketchy, and there is always the possibility of next year (when there is not a heatwave).  So we decided to leave the third finger of the Peloponnese for another day and make a big leap across the Spartan valley, skirting Tripoli (Tripoli?  How did that get in there?) to a spot just around the end of the Gulf of Nafplio in the Argolid.  Yes – where Jason and his Argonauts came from!
Coming back to earth – today was election day in the UK and we wanted to keep an eye on our hastily arranged proxy votes – we needed a campsite with site-wide wifi so we could have Radio Four on all night.  Radio eats up gigabytes – a lesson we learned the hard way in Spain in February.  It is one of life’s great pleasures to drift in and out of consciousness and hear how the results are going without having to be fully alert!   So, reluctantly dragging ourselves away from the casual atmosphere at the Dimitrios beach, we headed for an ACSI campsite that promised shade and wifi for a modest fee.  It was a long day’s drive to Lefka beach, Vasari a few miles the other side of Nafplion.  We paid little attention to the port from which Jason set sail, other than to scour the shop fronts for a telephone shop that was open for business – something we still had not found – closed for lunch, 3; open, 0. The site is terraced down the steep slope to the sea.  The terraces are overhung with cloth, filling in the gaps where the sun would burn down between the trees as the sun moved around – the first time we have experienced  that. 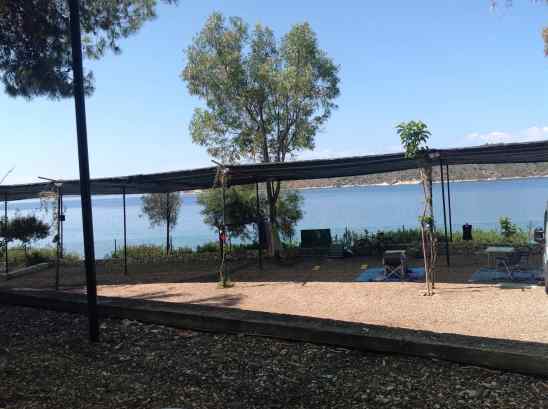 We pick a spot with a bit of a view that benefits from both tree and cloth shade and is close enough to Reception to get a signal.  The beach is pebbly, the water is the beautiful translucent turquoise we have come to expect and there are some rocky outcrops to make the swimming more interesting. 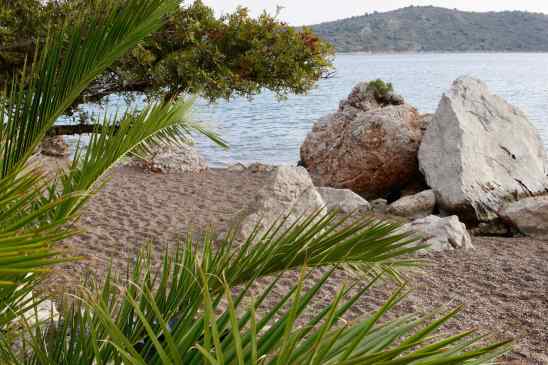 We ate at the family-run taverna at the top of the slope. The two small fish I ate had probably been frolicking in the water beside me earlier on:-(  They were very good fried on the plate but made me work to separate their tender flesh from their tiny bones:-(( 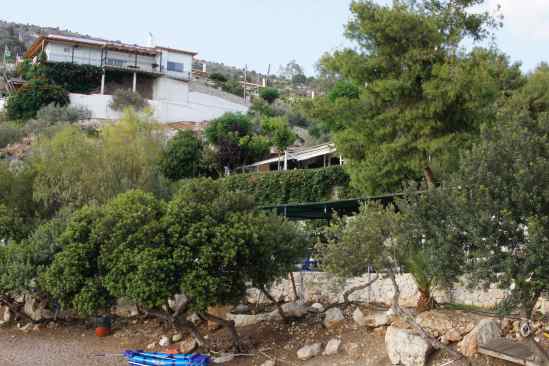 It rained heavily in the night and the cloth cover served to funnel it noisily into several big waterfalls rather than the usual all-over patter. The wifi signal was worryingly weak for streaming but artful positioning of the iBoost WiFi system magnified it and gave a constant signal that did not seem to pause to buffer all night. Surprisingly, not many fellow campers were tuned in to the overnight UK election results. Waking at one point I heard them going on about Labour’s amazing performance and dozed happily for an hour or so thinking they had done it, only to awake again as a commentator said something like “We must remember Labour has not actually won the election”  😦  Realising that Theresa May had done so badly was some consolation.
We stayed another night.  Neil was a bit worried about the VERY steep access drive. It is only short but hairpins up the campsite terraces straight out onto a tight, undercarriage-scraping junction with the main road.   The main problem – the drive is on the front wheels and most of the weight is on the back. The wheels have spun uselessly before on a steep gravel drive; that time Neil had needed to back up and take a run at it with me on the road above to stop any oncoming traffic.  Stopping for a run-up was not possible on this drive so Neil waited until it was completely clear as far as he could see before taking it at speed. The unseen van coming down the slope graciously ceded the lane as we roared round the bend! That is the rule apparently – those going up the hill have right of way. Glad he wasn’t ten seconds earlier though!
Mycenae and the tomb of Agamemnon

Today was scheduled to be a short drive across to Isthmia as we planned to spend some time at Mycenae – the hill-top palace of Agamemnon.  This is the place he called home and came back to after ten years fighting alongside Menelaus and Odysseus, and various Gods, outside (and then inside) Troy.  No sooner had his armour rattled to the ground in his bathroom than Clytemnestra, his wife, and Aegistheus, her lover, murdered him.  She was upset that he had thought it acceptable to sacrifice their daughter to the gods in exchange for providing favourable winds to Troy ten years previously.  Hmmm.  He was buried in the royal grave circle with a golden death mask nonetheless.  The mask was found attached to his skull – whether it is actually him is not certain.  But you too can gaze upon his face in the museum. The site is a fortified hill town – walls surrounding a palace, temple and all the associated buildings needed for everyday life in the 12th century BC. 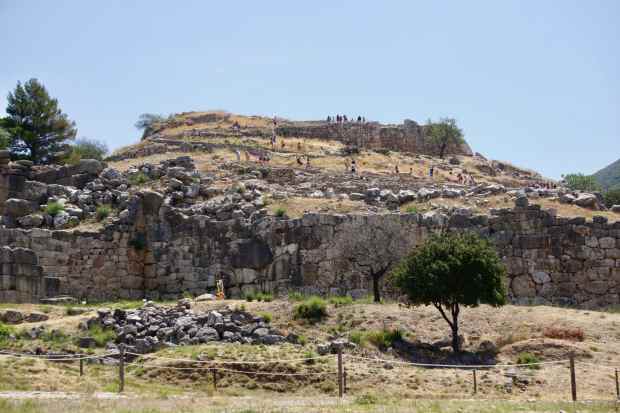 It has some amazing tombs. That hole behind the ropes is the roof of that of Aegistheus which has collapsed. Seen from the inside …. 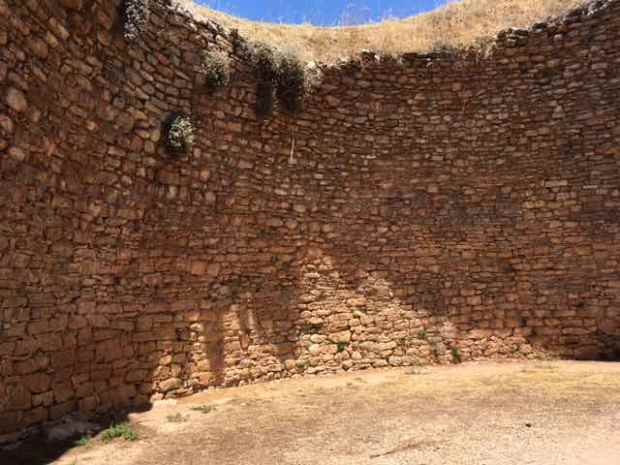 There are altogether nine huge tholos (beehive) tombs.  Below is the entrance to that of Clytemnestra 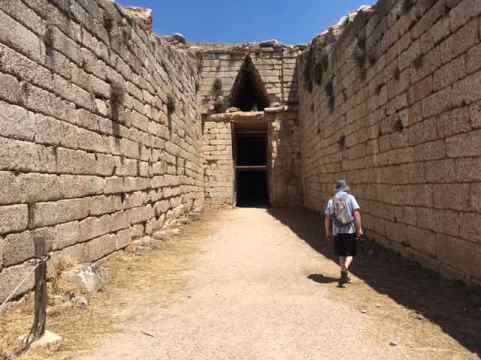 And a rather inadequate shot of the dome inside – superior quality to the rough stone of that of her lover. 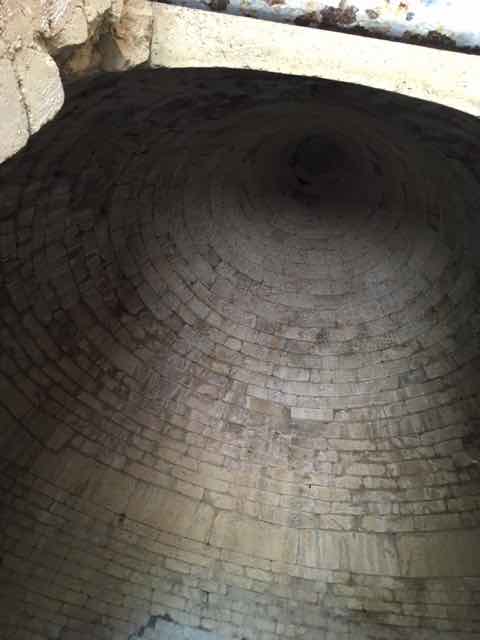 Some are shaft graves inside the walls… 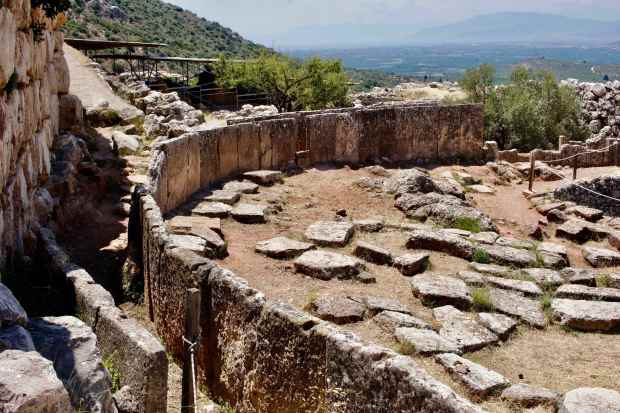 Starting at the famous Lion Gate 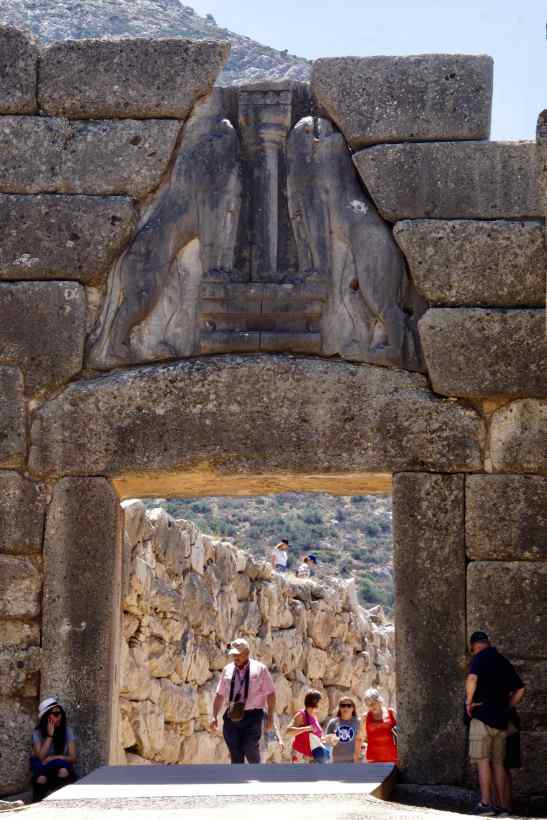 we made it all the way to the top in the noon day sun… one of us wilting in the heat more than the other…. 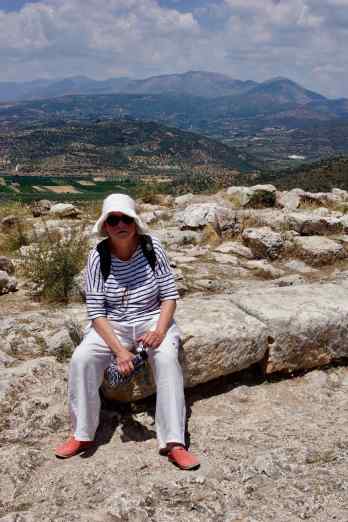 I needed support going down because my smooth, flat soles were inclined to slip on the marble paving slabs on the paths – brought to a high shine by generations of feet.  If you go – wear good grippy trainers.   To show the height – you can see the many buses in the car park. 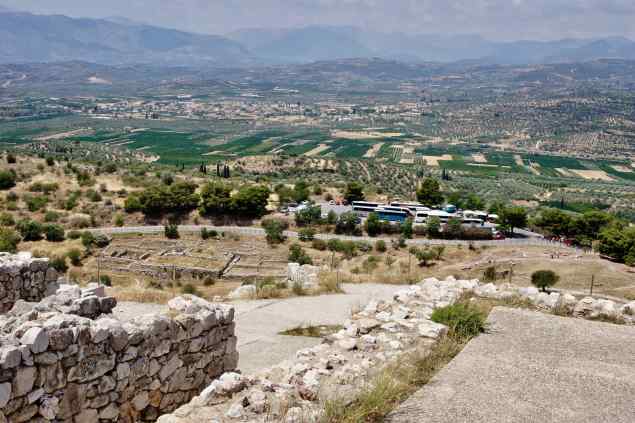 Learning from our experience at Olympia that museums were not to be missed, we optimistically walked over to it – it’s a small one.  There was the hoped for air-con, but they were being very south european with it – lowering the temperature only to a stuffy 29.5 degrees! The exhibits were lovely – less huge statuary and more cheery votive offerings and jewellery. 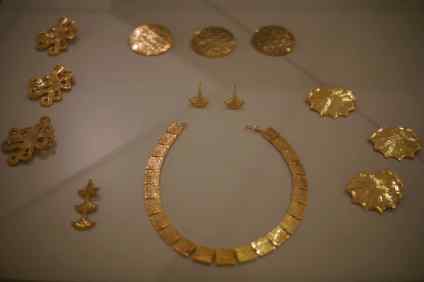 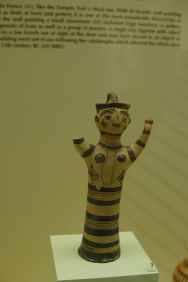 Before long I was unable to fully appreciate the beautiful things on display because the heat was getting the better of me.  Heading for the exit I found a floor level air conditioning unit  and spent several minutes draped over it fearing heat stroke more than legionnaire’s disease.
Our destination for the night was a free parking spot on the sea at Isthmia.  It would have been fine – a strip of parking alongside a public beach at the edge of town.  Because it was Saturday though it was heaving with people enjoying the sea and a dive centre playing loud music.  There was no shade and, being in a small but bustling car park, no possibility of putting out the awning or chairs.  There was a campsite only a mile away so after a few hot minutes we moved on.  Isthmia camping is right on a lovely beach, under trees and with low hedges marking pitches. 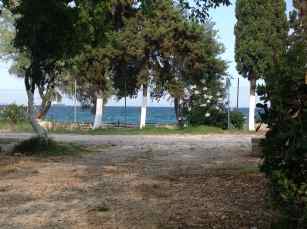 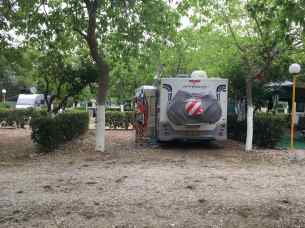 They seemed rather unprepared for the season, although there were a few campers there already, and were a bit off-hand.  The wifi was poor, the facilities were uninspiring but perfectly adequate, apart from the lack of hot water for washing up – which always annoys Neil.  And they charged 22 euros even with the ACSI discount!  Having said that – it was a very nice place to stay and the beach was lovely. The clouds rolled in overnight promising cooler, if wetter, weather for the next day’s cultural outing. 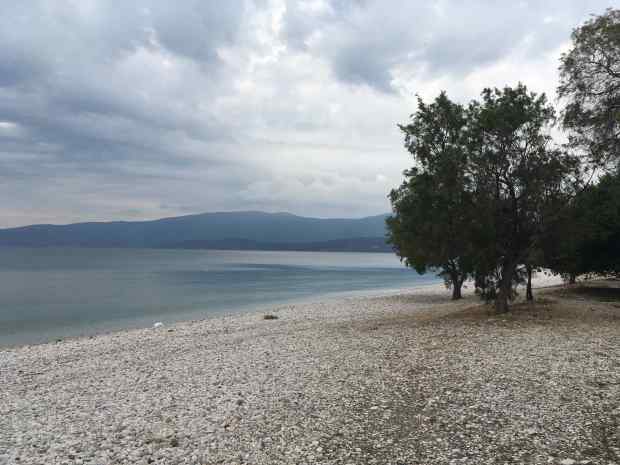