Because it was getting hot..

Coming down from the mountains it got hotter and hotter – the Po valley is a long flat part of Italy and when it gets hot, it gets HOT. This is fine as long as we are driving along with the air-con on, but very draining once you stop in a sun-blasted aire.  Judging from a tiny sample, the provision of public shade is not as widespread as it seems to be in France.  The aires are not as well signposted and often seem to be in car parks in town centres – nice and sunny!   My unfamiliarity with the Sostas book and difficulty with plethora of GPS co-ordinates had me reaching for another resource – OurTour’s invaluable map of their own stopping places.  They took the route over the Col de Larche and then across Italy, so I converted their decimal co-ordinates to Stell’s preferred format and followed in their wheel tracks. Thanks Ju and Jay and a big woof to Charlie.

Stella showed a good route along an A road road running parallel to the toll road all the way to a precision location in Asti (yes, where the spumante  comes from! (Other regional wines are available.)).  We were trying to be economical by avoiding the toll roads.  Never again in Italy!  The road surface was appalling – broken and potholed – Portia was rattled to her cogs and we were shaken and jolted.   The amount saved on tolls would never cover the repair bill for joint tightening and nut and bolt replacement! I guess the years of financial austerity imposed by the European Commission, the IMF and the banks are taking their toll.  We eventually rattled into the car park designated as an aire in the big, big, city square at Asti.  The site itself is not picturesque but the location is terrific – a short walk to the tourist office, the many eateries in the arcades and the historic sights.  A bit a of shade from the merciless 30 heat would have been be good too:-(

The TO provided a map and guidance so we headed straight to the café area for our first meal out.  Neil attacked a mega bruschetta and I had a Salad Niçoise – I like to stay local in my food choices.

A couple of icy menthe á l’eaus (for want of knowing what they drink in Italy when it is hot) and we felt up to tackling a few sights.  Only the churches are open on Mondays so we dawdled in the peaceful cool of Saint Secondo until it was no longer seemly. Then back to the oven that Portia had become and quickly out again over the road to the park to read and plan until the evening cool.

A bit of a heatwave was forecast so two decisions were made that evening: firstly, to race across the Po valley to the Adriatic, and secondly, to do it on the motorway! The urge to swim was taking over all good resolutions about culture and the like. This was a shame because every possible route resonated with references to Shakespeare, fashion, wine or something culinary: we had stayed in Asti but drank no Spumante, we whisked past Parma with never a morsel of ham, saw Milano sign posted to the north without rethinking our wardrobes and headed for Ravenna which I am sure has some Shakespearean connection but I can’t quite remember what. The consoling thought is that we can always come again (inshallah)  and come a few weeks earlier in the year.

Only one stop would be needed before the campsite near Ravenna and that was the  private sosta in Fontanellato.  Mere minutes from the motorway it is cunningly placed under an array of solar panels.  Clever – protection from the sun whilst also profiting from its energy – feels like revenge! The aire itself is fully automatic: barriers which open to let you in when you  take a ticket and let you out when you present some money.   Would be helpful to know in advance how much they were going to demand beforehand.  It was ten euros but one would-be camper was getting a bit exercised about it. There were some nice clean toilets as well as the usual  services, so definitely worth the outlay. 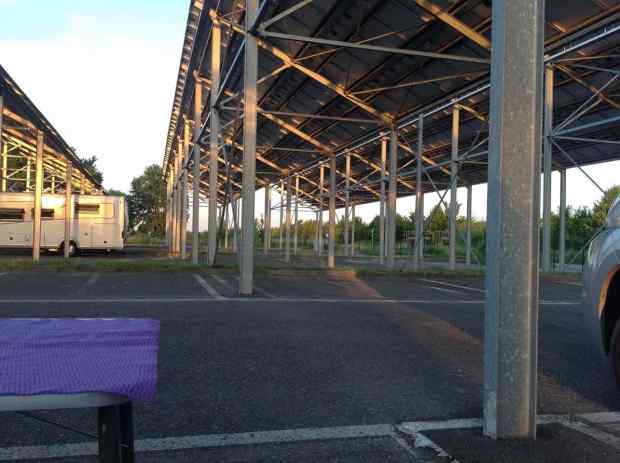 The town of Fontanellato itself is an attractive, historic spot with a fortress dating back to the 15th century. It is   a moated fort in the middle of town, surrounded by a quadrangle of  ancient arcaded buildings now housing  cool and shady tables for bars (beers were taken) and gelateria (ice creams were not for some reason). There was also an optician who took at least fifteen minutes to replace the nose pads on Neil’s prescription sun glasses for three euros.  And I helped myself to a sherbet lemon from the bowl of sweets on offer while you waited. Can’t get nasty at that now can you? 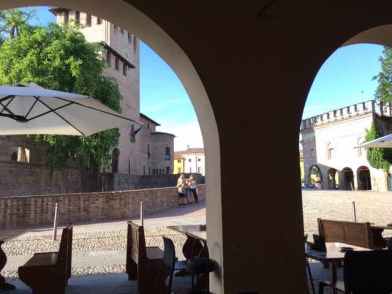 Buoyed by the thought of a swim in the sea we raced down the toll road on cruise control at fifty mph to a place called Camping Ramazotti at the Lido di Dante near Ravenna.  There was also a Lido Adriano just a couple of kilometres away and the road signs pointed to the two Lidi.  First Italian grammar lesson – the plural for Lido (meaning shore or beach) is Lidi . Not to be confused with Lidl one of which was also nearby! Hurrah! Ramazotti  is an ACSI campsite and spreads itself over many acres beside the beach.  ACSI describes it as basic.  I would beg to differ and call it unsophisticated – no electronic doors to the facilities here  – no doors  at all in fact except on the toilet and shower cubicles themselves, and roofs only where needed.  But all clean and working well. 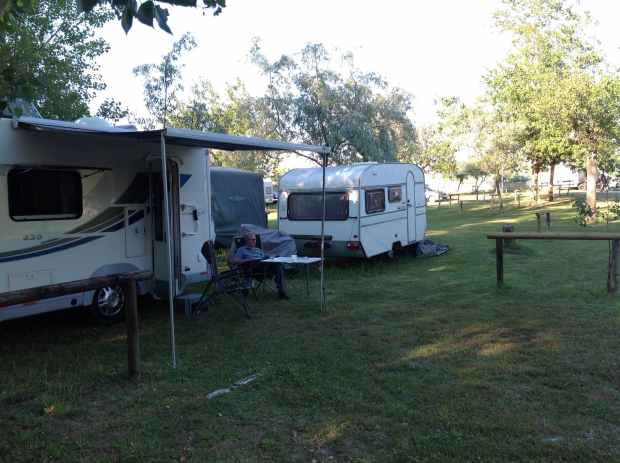 There is shade if you seek out the bigger trees and employ your compass skills, and plenty of space for the pitches. The sea is just at the back there – through a gate and you are on the beach – miles of sand and a view of Rimini with its echoes of seventies glamour in the distance.