….in more ways than one…

So this a shortish blog.

We came here from the north, went south and then east – so clearly it was time to go west.   To the west of us, from memory, is the flattish plain of Centre which undulates its way into the flat valley bottoms of the Loire and Cher rivers.  There is a fondly remembered campsite on a lake at Chateau la Valliere just beyond the Loire itself.  It was one of the first few campsites we stayed at in 1990 when we had arrived limp and bedraggled in a car with no aircon and at least 30 degrees outside.  The lake was a bit tepid at the end of August that time but a lifesaver nonetheless. It’s a Municipal campsite so should be relatively cheap.

We went through the usual bad tempered (maybe slightly better this time?) packing of van and shutting up of house and headed for Bourges where

there is a lovely shady double avenue of trees that form the Aire de Service for mohos. It is only a couple of minutes walk to the city centre and is free to park, a couple of euros if you want water or electricity.  We needed neither of those – we thought – as we smoothly connected to Radio Four, turned on the gas bottle and filled the kettle for a nice cup of tea in the shade.  But – no gas came through the cooker.  Then, no gas came through to the fridge.  Or the water heater. Hmm… lots of knob twiddling, button pushing and head scratching.  But still no gas.  Something had gone wrong.  Without gas or electricity we could not cook and the fridge, running only on 12v just keeps things at the temperature they were already at but cannot handle actually chilling them further.

What to do?  We knew there was a moho shop on the outskirts of Bourges as Neil had found it some time ago just in case.  With a bit of strangled internet band width we located it precisely and discovered it was shut on Sunday (they’d go out of business in the UK!) and Monday mornings!  In prime holiday season!  Bankruptcy is too good for them! Anyway – it was hot and we had plenty of salad stuff on board so we decided to enjoy Bourges until Monday lunchtime then take it in.  The main drawback was – NO TEA!

The details are too painful and boring to relate but eventually a puzzled mechanic got it going on Propane and with yet another style of pigtail. He could not sell us the Propane though as they had run out and he was using the works bottle.  No problem, 100 euros lighter, we  carried on and would pick up a bottle at a garage en route. A good plan but when we tried to fulfil it we found we could not fit a second 13.5kg gas bottle in the locker.  It is designed for one big one and one small one and the big useless Butane was already in there:-(

Naturally  it had been the hottest day of the year that we had spent standing in garage forecourts and heaving gas bottles around (Neil that is), so in desperate need of a swim we aimed for the banks of the Cher.  There is a lovely river beach in Chabris with another double avenue of trees forming a Municipal campsite just over the road. 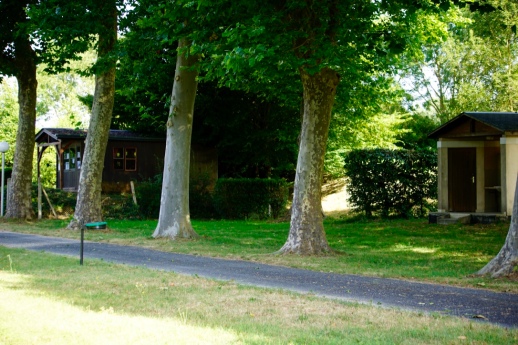 The cheapest we had experienced in a long time and with veeeeery basic facilities. But quiet, shady, handy for a swim.  So, no real complaints.  We had to park adjacent to the only other campers in the whole place in order to get on hook up to be able to boil a kettle for some tea 🙂 and freeze the fridge down.  We also had to park with our rear end hanging out a bit on the campsite lane in order to get both shade and satellite (thanks new compass).  But – neither car that passed in the next few hours had a problem. 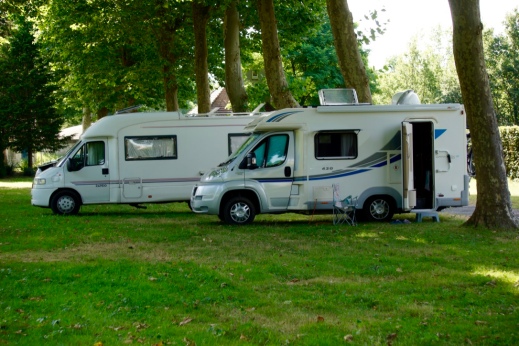 Clearly – this trip was doomed and we needed to get home to sort out the gas bottles.  So we turned about.  This is the point when Neil engaged on lengthy on-line debate with other moho owners.  If it works on Propane it should work on Butane –  much debate about pressures and temperatures, bulkhead regulators and rupture hoses was to no avail.  Butane did not work.  Newly acquired Propane did. They concluded the Butane gas bottle was “MT” (and, by implication, we should hang our heads in shame).  By its weight we were sure it was full but to eliminate the possibility we tested it on our cooker at home – it is full and it works fine. We can hold our heads up again!  But still no Butane on the van. The solution can wait until we can speak the same language as the technician. 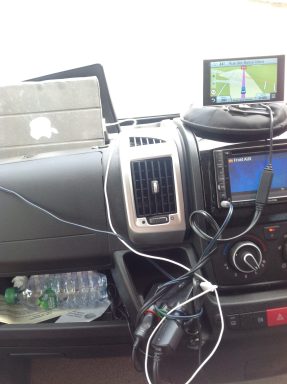 I will take this opportunity to show you our sophisticated solution to the absence of a functioning van CD player.  It goes like this:  connect iPad into Auxilliary socket on van radio.  Find gadgets to allow many connections to power different devices via different ports.  Play previously downloaded music.  A teenager would have known that.  Well – it was a helpful young man not much older than that who explained it to us slowly and carefully  and sold us the necessary piece of cable.  The other wires are for dashcam and satnav and, as a bonus,  you can see how straight the roads are in Centre!