The sun, the heat, the flies….

It’s hell out there Carruthers, but someone has to do it…  The heat is rising again and we are on the move again.  This time to the east – the Jura – somewhere we have only visited  in passing.  It has mountains, trees and rivers though and sounds cool and inviting.

Setting out is a real pain.  We have become over-casual about the packing and do not do enough in the cool of the previous evening so have to run around collecting all the forgotten things as the sun starts getting nasty.  Do tempers fray?  Maybe they do.  Cool is certainly lost in more ways than one.   Next time everything bar the fresh stuff will be sorted out  days in advance for a cool and collected start!  Of course it will.  It is only when we are an hour away that for some reason we start thinking about passports and driving licences and EHICs.  Well – I have the passports.  I carefully took them out of the pouch with the other valuable documents and put the rest carefully back in a safe place indoors:-(  Apparently it is an instant fine if you cannot produce your driving licence when asked.  For the past 16 years they have stayed safely indoors.  Oops. Should we turn back after such an inauspicious start?  We don’t.

The aire at Autun is next to a lake 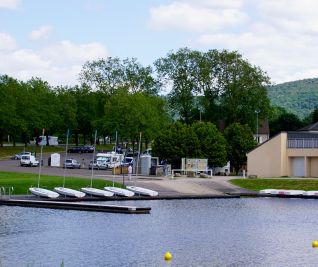 with a marina but no swimming.  There is no shade to park in but trees a few yards away by the water.  The parkings are narrow, as if marked out for cars but signposted for mohos.  Like the couple of vans already there we take our one-and-a-half pitches and, edging our rear overhang over the kerb behind us, discover by ear where our spare tyre is slung. Underneath in a sturdy metal cradle as it happens.  No harm done.

Apparently the town is full of roman ruins and medieval buildings so we take the 15 minute uphill walk to Centre Ville as the early afternoon sun beats mercilessly down on the cobbles.  Towards the top a beautiful quadruple avenue of trees gives a couple of hundred yards of shade and hosts the post-prandial boules match.  Another tree lined square at the top provides shady café tables and cool, cool drinks. 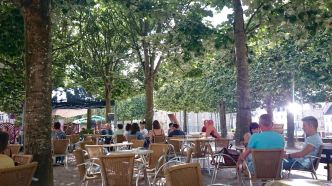 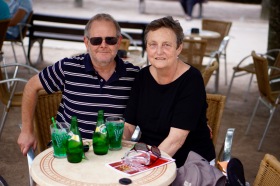 Perrier menthe – icily refreshing and probably cleans your teeth at the same time. 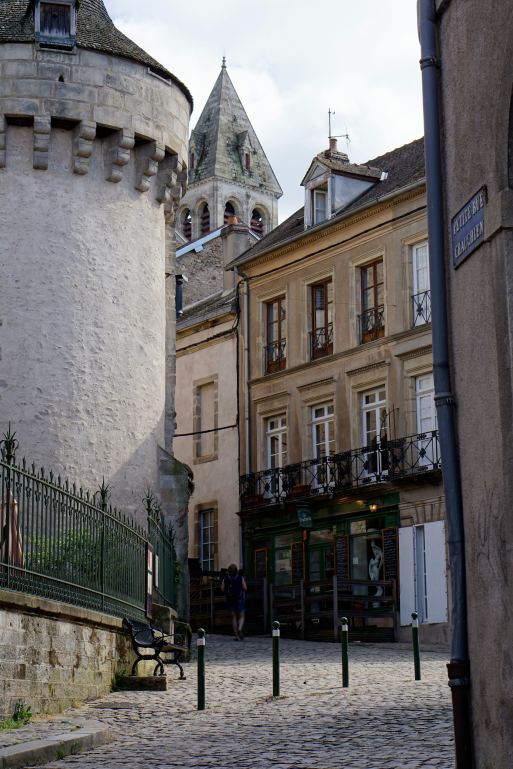 We wander the medieval streets and churches for some time.  Back at the aire several more vans have turned up and edged in.  People have now broken out their tables and chairs (not strictly allowed in aires but done everywhere) and are sitting in the shade of their own vans or under the trees having the evening apero.  At least the unencumbered view of the sweltering southern sky means we get satellite because our mobile wifi is having difficulty getting enough bandwidth to do very much.

A good night’s sleep on the level-enough surface and we head off to Les Trois Ours campsite  in Montbarrey on the Loue. Plenty of scope for weak jokes there.  We can have a standard pitch for the normal rate or pay extra for river frontage. 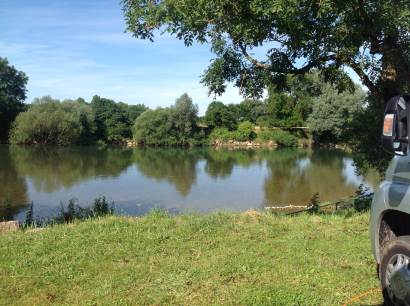 We opt for standard this time but our cable is too short to reach the electrical point so we end up with riverside anyway.  🙂  And what a pitch – mere feet away from the river with some shade and satellite reception.

The awning comes out and is draped with sarongs and towels to extend the reach of the shade.  I blog in the relative cool – wifi reception (our own) is adequate here if slow. We both swim. It gets hotter and hotter and we swim both at dusk and dawn.  Showering becomes optional as we are in and out of the water all day anyway.  Neil grows a beard.

The downside – the flies!  Mon dieu!  The first day there were a few – but only a normal sort of number. The second they seemed to have multiplied in the heat and by afternoon were pestilential – but only under the awning – fastening themselves to its underside and the shade on the side of the van – providing an easy target for Neil’s deadly swat. 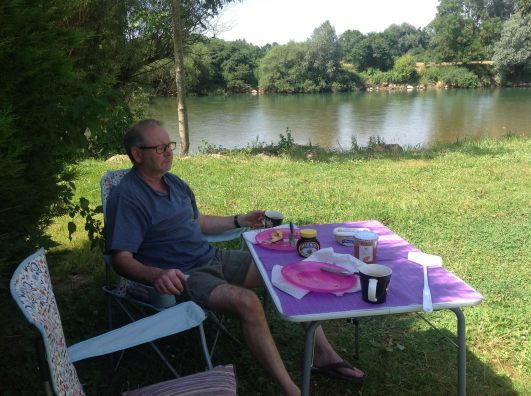 So the solution was simple – the flies could have the shade of the awning and we would have the much cooler shade the trees.  The lady at the at the Accueil claimed it was due to all the rain this year.  That rain is getting the blame for a lot of things. The number eased off again the next day when the weather cooled a bit. Or maybe Neil had actually killed them all.

It was a lovely stay. Lovely river, lovely wild life, lovely weather for sitting in the shade beside the river.  Or in the river. 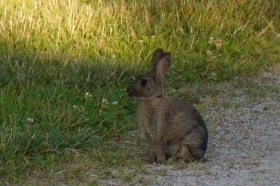 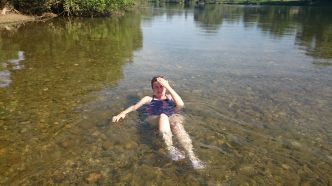 We had expected a small shop on site but it was not stocked up yet although you could order bread for the morning.  The nearest shop was seven kilometres away – too far to cycle. Even in the cool! We had just about enough food and drink, supplemented by a meal at the cafe on site.  And there was a bar on site as well – so no need to panic!  But definitely need to get a gas barbeque. Even when there is a breeze it does not seem to blow through the kitchen end.

I had plotted a two day return looping further east to some lakes and waterfalls but we decided to head back for some guaranteed cool at home and because storms were predicted in the next day or two.  We had one stopover at L’Etang-sur-Arroux. Another campsite on the water’s edge – beautiful for a swim. 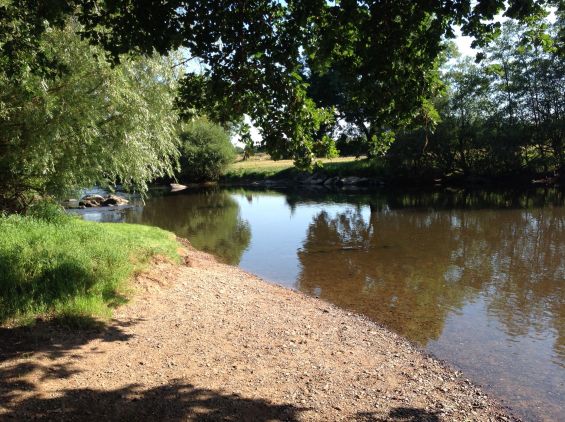 Too expensive this one (27.50) but I had expected an ACSI discount since it offered them until 9th July.  The dates are not inclusive though and 9th was the first day of full prices. Boo.   Too few and too far for the sanitaires but good site-wide wifi and excellent shade (and satellite!).  And no flies – so Neil could rest. 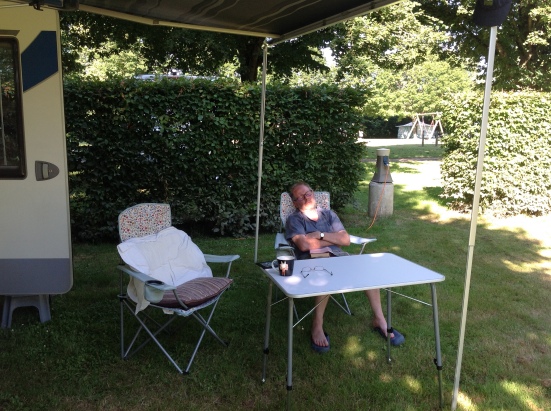