It is nearly two years since I put a page up on this blog.  The last entry

covered up to September 2018 and as I write it is July 2020.  We’ve navigated the lockdowns in France and the UK and are currently in France for another month or so.  To cover two years’ travels means the next few blogs will be a fairly compressed catch-up!

unspecified periods of time. Brexit was scheduled for January 2019 and there was a lot of confusion about what rules would apply in the transition period – if it happened. To make the most of this possible final year as full Europeans we found house sitters and bought insurances that would cover us for longer than our usual three months, up to a possible six. We had set off in July planning to spend the heat of the summer based mostly at the fermette and then try to go further afield to Germany and maybe even right across to Croatia in the late summer and autumn. Our discount camping card (ACSI) is only valid out of high season and the weather is usually still great, so this would be a good chance to use it to the full.

On 5th September 2018 we arrived back at the fermette having spent a week or so on the water with ne’er a drop to swim in. Such is the nature of the canals and navigable rivers in France where the boats don’t use on-board tanks for effluent. The on-going heatwave made us nervous of heading for unknown, inland places and we just wanted guaranteed shade and water for a plunge. We shelved the idea of Germany, Austria, Croatia and came up with a straight two way choice – straight south to the Mediterranean or south-west to the Atlantic. South-west won with several tempting sites on the coast near St Jean de Luz.  Pausing only a day or two to do laundry and generally sort the van out we got back on the road

First stop, a favourite riverside campsite for over twenty years, Beaulieu-sur-Dordogne. This time we chose the cheaper option of one line back from the riverfront – can’t quite remember why now. It was a good pitch with reasonable shade and an ever-changing river view as occupants of the riverside plot opposite came and went over the next several days. 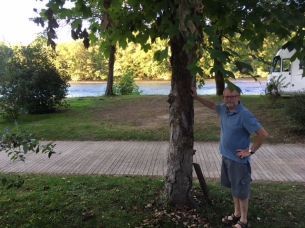 We just relaxed for the next few days: river swims, walks in the medieval town, meals in the shady town squares, dips in the newish but shade-free pool in the evenings. 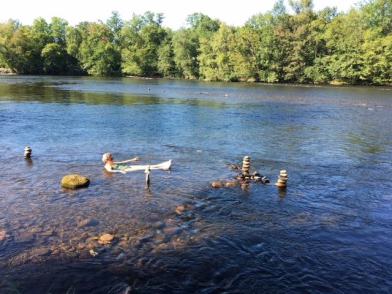 Chilled and ready to go we headed off again in a southwesterly direction across bastide country. We were alone in the car park just outside the town walls of Monflanquin and walked up to the town itself. It is a beautiful thirteenth century fortified town: a deeply shaded,  arcaded central square lined with artisan shops and pots of geraniums; magnificent views of the surrounding countryside from the ramparts. France is full of these unsung, but not unknown, gems – so many that each has only a few tourists at any one time. This was just a one night stop though as we headed for the sea. 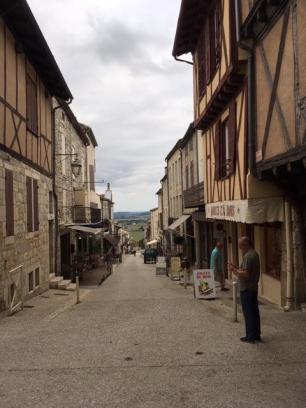 We reached the Atlantic just north of St Jean de Luz on 14 September. It was fabulous. Camping Tamaris is just above the sea – a short access road with a couple of shacks selling surf boards or seafood tapas. We were definitely in the territory of the sun-streaked, slender, bronzed, beautiful people. Most of them were back at work though so we older, but still beautiful, people could hold our own! The beach was a sandy bay with a natural sand bar visible at low tide across most of its opening, breaking the full force of the Atlantic and providing a wonderful swimming lagoon. 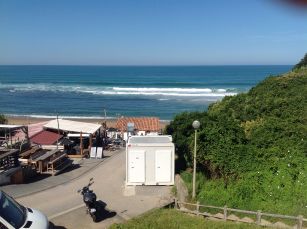 The campsite had the most appealing swimming pool I have ever been in. A large pool with tapering depth, lined with blue-brown-green multicoloured tiles that made it look aquatic rather than clinical.  It had huge glass covers on runners for out-of-season use. I wonder it if opens for Christmas?

A short walk along the coast was the next bay – this one much longer and with bigger waves. This is where the remaining beautiful people hung out with their surf boards, bandanas and insouciance.

Highlights of the next few days: a cycle ride along the littoral to St Jean de Luz which still retains some turn of the century glamour. A line of concrete wartime bunkers staring out to sea, an arts and crafts exhibition (of hugely varied talents) all along the promenade in town, fish restaurants as far as the eye could see, sun, swimming, beach bumming, beers and tapas. Neil loved the leisurely morning walk to the nearby grocery store for fresh bread each day. It was a stay that we will remember with nostalgia for the carefree beach life and we will be back. We hope.

We were reluctant to leave the sea and head back the way we had come, so after five magic days I plotted a route north along the coast then due east. There are many campsites and moho stop-overs available on the Atlantic coast. We trundled from one to the next failing to find one that met our, fairly minimal, criteria – plenty of shade and immediate access to sea (and not big “family friendly” all singing, all dancing sites). The one we found at Biscarosse was laid out expansively under the pine trees that cover the land all the way up the atlantic coast in this part of France. No rocky bays here – just miles and miles of high tussocky dunes and crashing waves. It is a bigger, more corporate  site than we usually choose but seemed pretty relaxed and only sparsely occupied.  It was a short stroll to the beach down a shady path.  At high tide the sea was quite close, but it went out an awful long way. It was too far for me to want to stroll in the heat of the day in swimsuit and flip-flops, so we were grateful for the large multi-pooled pool with sun loungers and parasols.

We had only four days left and, right on cue, the weather was threatening to break.  So we felt OK about heading inland.  Our route went via historic Brantôme (8th century cathedral!) in what used to be the Dordogne before they reorganised the boundaries. It’s now Périgord and it was definitely clooudy. Then the spa town (since Roman times) of Neris-les-Bains. 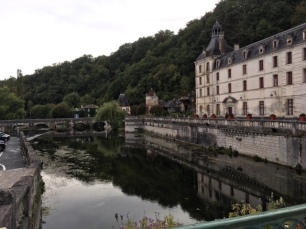 This got us home in the morning of 23rd September – our deadline for the appointment with the désinsectisateur who was coming to rid our chimney of a wasps’ nest:-(